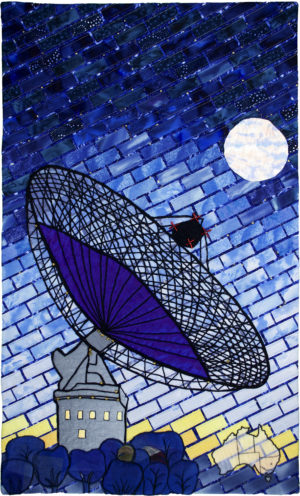 When the Apollo 11 Moon Landing happened on the 21st July, 1969, signals were being sent from NASA’s Goldstone, California site and Honeysuckle Creek in Australia as well as the CSIRO Parkes site in Australia. Within 9 minutes of the beginning of transmission, once Mission Control at Houston saw the pictures from Parkes which were of such superior quality to the others, their signals were used for the rest of the 2.5 hour broadcast.

The Parkes Telescope is 64 metres in diameter which allowed it to broadcast such great pictures despite the weather difficulties they faced. As an Australian, the Parkes telescope seemed an obvious choice when deciding on a subject for this challenge. On a personal note I was in Year 8 at High School and after cooking pasties in Cookery Class that morning was allowed to go home to a friends house to watch the telecast. Little did I know at the time what role Australia had played.