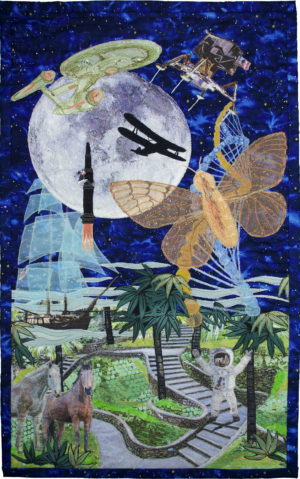 The Rocket That Grandpa Rode

Tricky but fascinating combining the history of discovery/flight from the Wright brothers to the moon and stars. Is exploration hard wired into our DNA? I included the tall ship to reference Mr. Buffet’s background as well as Mr. Roddenberry’s not infrequent sea captain vs starship captain inferences in Star Trek.

I only wish I had discovered that the bus lyrics referred to Mr. Buffett riding out to view the last shuttle launch with Neil Armstrong’s grandchildren early enough to incorporate bus-children-shuttle as well. Too late to fit anymore images in.

I did get a kick out of photoshopping my daughter off her horse to ride the Apollo 11 rocket and found my ideal stairway in a Hindu monastery in Ubud, Bali, Indonesia. I think you can guess that while I appreciate “less is more” when other people do it, I am a “more is more plus” person myself.