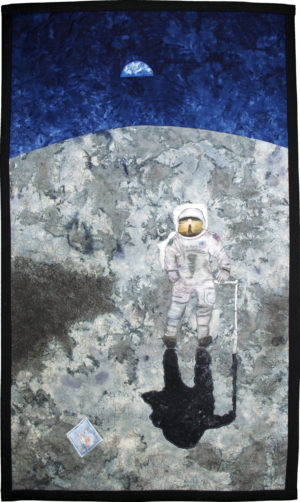 I have sewn and made quilts, as well as painted and drawn art. I was intrigued by the idea of blending the two processes together in one piece of art. This is my first piece to try to combine art and quilting.

I was inspired to create this piece by a photo of astronaut Charles Duke, on mission Apollo 16. Duke was the 10th and youngest astronaut to walk on the moon. One of the main missions of Apollo 16 was to collect rock samples at the Descartes Highlands landing site. In the photo, Charles Duke was collecting rocks near the edge of Plum Crater (seen on the left).

I used a new art medium that I had not tried before – Inktense pencils and blocks. I used the blocks to darken the surface of the moon, and also to help make the crater.

I had 3 main goals I wanted to show in this piece.

(1) In Duke’s helmet you can see the reflection of Commander John Young, the astronaut taking the photo. I wanted to try to depict a portion of this scene in my piece. I used a metallic fabric paint to help show the reflection and an Inktense pencil for the shadow.

(2) Astronaut Duke took a photo of his family on the mission and before leaving, placed it on the surface of the moon. My daughter made me a drawing of the photo and I used a baggie so it would look similar to the plastic the photo was in. I was then challenged as to how to attach it to the quilt. I decided to try invisible thread, which I had not used before. I was a little anxious as I had heard of others having problems with invisible thread. I went slow and was happy that it worked the first time.

(3) I wanted to try to show the “Earthrise,” and give a sense of the distance from the moon to Earth and also a little bit of the aloneness the astronauts might feel. It looks like a small marble just hanging in the sky. I have always been very fascinated by the concept of going to the moon and how brave the astronauts are to accomplish such a feat of the unknown.