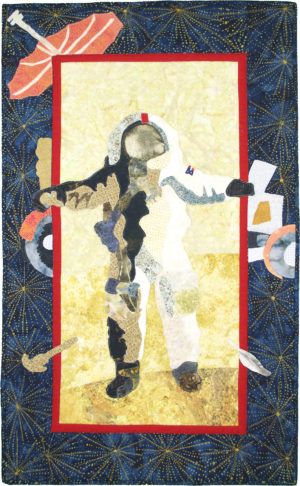 David R. Scott was the commander of Apollo 15. The fourth manned mission to land on the moon, this mission was the first to drive the Lunar Rover Vehicle on the moon. Apollo 15 was Commander Scott’s 3rd and last mission flight, so he wanted to get as much science into it as possible. To this end, he conducted the famous Galileo gravity theory test, namely dropping a geologic hammer and a falcon feather at the same time and being filmed doing so. The two items did, indeed, hit the moon’s surface, in zero gravity, simultaneously.

Going into this project I truthfully knew virtually nothing about Commander Scott and have to say I thoroughly enjoyed learning what I did about him. While I flirted with the idea of showing Commander Scott as a Used Car Salesman selling the LRV, I knew in my heart that he needed to be portrayed seriously, as the important role model he is. I did love including a couple of his “firsts” in this quilt.

Raising a 9-year-old who is interested in getting to Mars to revive the rover Spirit there, I wanted to (subtly) applaud the USA in my color choices and make this piece suggest a poster that might hang in a young aspiring astronaut’s bedroom, in appearance.