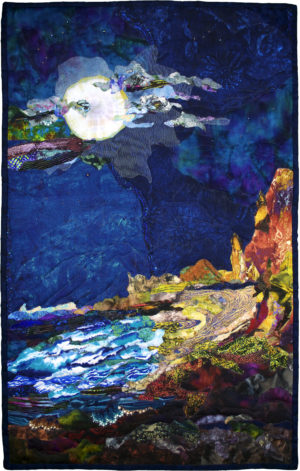 One of the earliest scientific discoveries about the moon was in 325 BC, when a Greek scientist observed that tides were related to the phases of the moon. As a child, I often gazed at the mystery of the night sky, and even thought of becoming an astronomer. This special connection would surface again on family vacations to the beach, where I observed the beauty of the moonlight shining on the ocean waves. Today, I enjoy creating pictorial quilts and wanted to depict a moody atmosphere to reflect the scientific, yet poetic connection between the moon and tide.

Tides depend on the gravitational pull, angles, and distances between the moon, sun, and Earth, as well as the land shape and wind. In this pictorial of a windy seacoast, I wanted to highlight the phenomena of the full moon and the Earth tides, specifically low tide. To help reinforce the current low tide conditions, I used commercial fabric with curved lines to represent high tide wave patterns on the sandy shore. The night sky is composed of several mottled fabrics and tulle to mimic moonlight, while beads act as stars to provide additional luminosity to the shore below. The wave motif was echoed in the quilting for the background sky and in the cloud shapes. Only the moon and tide are in focus, and especially glow when viewed under low light conditions.