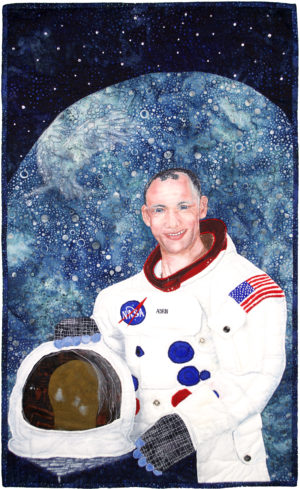 To Infinity and Beyond

In my research to find a photo representative of the Apollo 11 astronaut Buzz Aldrin, I chose his official NASA photo. There were many of him receiving metals, attending charity events and some personal photos throughout the years. I kept going back to his official photo taken by NASA. To me it expresses the excitement of what he must of felt being chosen for this historic event. The sparkle in his eyes and the genuine smile drew me in from the start.

I must confess that ‘Buzz Lightyear’ in Toy Story also came to mind, hence the title of the piece ‘To Infinity and Beyond.’ I remember huddling around the TV, watching them land on the moon, July 20, 1969 and planting the American flag. It still gives me chills to think about the courage it took. The eagle had indeed landed, and it paved the way for many more missions to follow. If you look closely at my quilt, you’ll see an image of an Eagle landing on the moon in the upper left side of the moon.