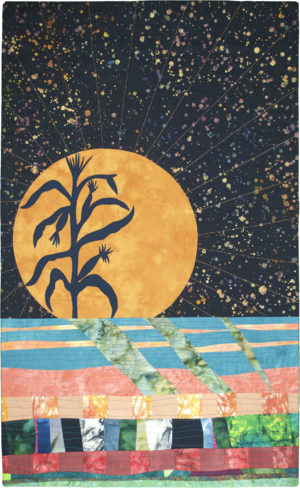 It is inspired by the song Harvest Moon by Neil Young. Growing up in Southern California I was in the heart of the peace and love movement of the 60s. Graduating from high school in 1969 I listened to Neil Young in Buffalo Springfield, as well as Crosby, Still, Nash and Young and went to more than one live performance.

Neil Young will forever be in my memory. He is one of the most gifted singer/songwriters of our time. His lyrics have always spoken to me, they are so simple yet they said so much. Harvest Moon, written in 1992 is a comeback album, and this song is a reflection of my life. Married in 1976, three children later made this especially poignant at 40 years old.

There is a full moon rising…lets go dancing in the light…because I’m still in love with you…on this harvest moon. It makes me feel warm and nostalgic with its sweetness and simplicity talk about a loving couple wanting to keep on dancing. Moonlight is not as bright as sunlight (the fires of youth) but still shines. Now we have been married for 40 years (doesn’t seem possible) and the light of the moon still shines!