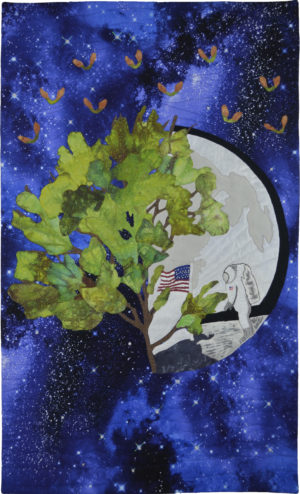 Stuart Roosa, Command Module Pilot of Apollo XIV, spent the summer of 1953 working as a “smoke jumper” in OR, parachuting into wildfires to put them out. That led to his love of forests and outdoors.

Every Apollo astronaut was allowed to take a PPK, Personal Preference Kit, along for the ride. These contained items, such as flags or patches that the astronauts wanted as souvenirs. When Roosa went into space, he chose to take 500 seeds from the Douglas Fir, Redwood, Loblolly Pine, Sweetgum and Sycamore trees. They were contained in a metal cylinder 3 inches wide and 6 inches long. They went around the moon with Roosa 34 times, while Sheppard and Mitchell walked on the moon. Nearly all of them germinated.

For three years, the seedlings, called Moon Trees were watched closely. They had offspring, half-Moon trees. All were normal, as far as they were observed. Unfortunately, when they gave them out in 1975 and 1976, no one kept systematic records and so the whereabouts of most of the Moon Trees are unknown.

This quilt is based on the Moon Tree Emblem. Floating above the emblem, through space, are some sycamore helicopter seeds.

Artist Website
← Out For A Stroll La Bella Luna →