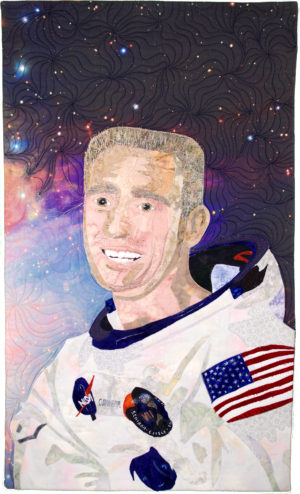 Astronaut Ronnie Walter Cunningham, enlisted in the Navy in 1951 and began flight training in 1952. In 1953, he took a commission as a 2nd Lt. and served active duty in the United States Marine Corp. Between 1956 and 1975, Cunningham served in the USMC Reserve Squadron. His present rank is Colonel USMC (Retired).

Cunningham was the second civilian to become as astronaut. He was the Lunar Module Pilot for the Apollo 7 mission in 1968. Cunningham has been awarded many honors and awards throughout his career.

His numerous achievements include fighter pilot, physicist, entrepreneur and venture capitalist. In addition he became a public speaker, radio talk show host and author of the book All American Boys. Cunningham is married and has 2 grown children.

To achieve my results I used raw-edge appliqué, thread painting, fabric ink and paints and a huge fear that I might not do this “All American Man” justice in my re-creation of him.

I used raw edge appliqué, thread painting and quilting to give depth, fabric inks and paints to achieve the colors I wanted.