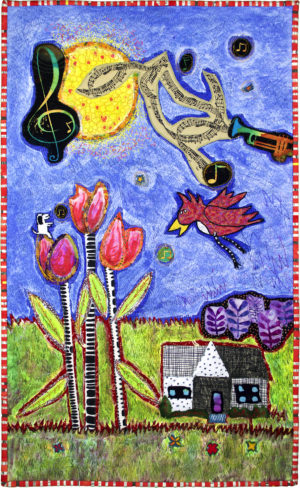 The inspiration for my art piece is the song “How High the Moon.” My favorite version is a recording by Ella Fitzgerald, who performs with light hearted combination of jazz and swing. When I hear this song, I think of a high school classmate who had the same improvisational wit and smart style. It could be the love song of my friend, Steve, and the love of his life, Gabrielle.

Steve embarked on a successful career in the space program, first with Martin Marietta, on the shuttle external tank program, and later as a test engineer for Boeing. Steve found Gabby (Gabrielle) in his early 20s and never looked back. Gabby battled diabetes since she was twelve years old. It was Steve who donated one of his kidneys so that she would live to see their two daughters grow up. He never gave a thought to himself. He told people to pray for Gabby as she took the drugs that would enable her to accept his kidney. Unlike some marriages where you witness love in the beginning, theirs grew as they went through hard times together. The girls were 27 and 24 when they lost their parents. Gabby succumbed to diabetes after a 40 year battle. Steve died from a two year battle with cancer. They reunited in heaven within 60 days of one another.

I used my own idea of fabric collage, utilizing commercial fabrics. I used textile paint and a glaze of Dynaflow in order to give a more painterly appearance. I followed with some thread painting and quilting.