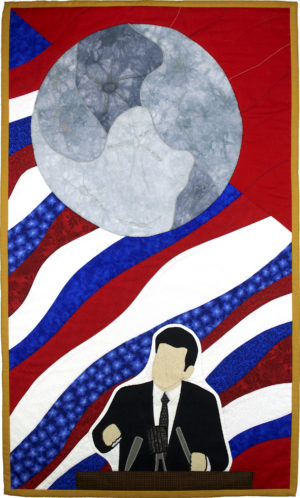 We Choose to go to the Moon

My reflection on the 50th anniversary of man’s walk on the Moon led me to what got the Apollo Program started in the first place: President John F. Kennedy’s desire to have America be a leader in space, and his inspiring speeches that issued a call to the citizens of the United States to support the considerable investment in money, energy and time that would get us to the Moon. I wasn’t around to hear his speeches in person, but even via a scratchy recording I have felt the power of his voice and his words. Kennedy’s call to put a man on the Moon gave hope and a clear direction for success to a country in the grip of the Cold War, watching a rival nation progressing faster in the race for space.

I chose to create a quilt that would represent both the tension and the potential of that time. The quilt depicts the “contested territory” of the Moon set against the red of the Soviet Union and the red, white, and blue of the USA. It’s a competition that would eventually be won when the Apollo Program inspired by Kennedy’s words (some of which appear in the features of the orb on the quilt) put an American on that tempting, mysterious, fascinating satellite we call the Moon.

← What If? : Craters in Color Way Better Than Sci Fi: Moon Landing Memories, From A to Z →