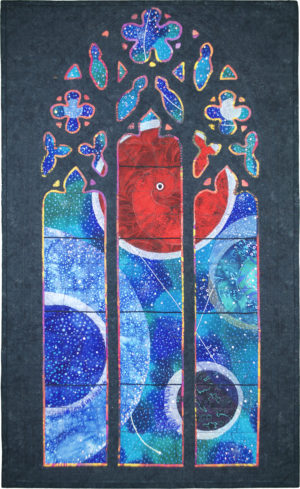 A small 3.6 billion-year-old piece of the moon is embedded in the “Scientists and Technicians Window” on the south side of the Washington National Cathedral in Washington DC. This 7.18-gram basalt lunar rock fragment from the Sea of Tranquility was a gift from the crew of APOLLO XI (Neil Armstrong, Edwin “Buzz” Aldrin and Michael Collins). It sits at the center of the red planet, sealed in a nitrogen-filled capsule.

The stained-glass creation, familiarly known as the “Space Window,” was designed by St. Louis artist Rodney Winfield and commemorates America’s exploration of space and man’s first steps on the moon. The moment I saw the window for the first time I knew it would be the inspiration for my quilt. Winfield “wanted to show the minuteness of humanity in God’s universe.” He included whirling stars and orbiting planets, featuring colors inspired by NASA photographs taken during the APOLLO XI mission. Light radiates from numerous solar spheres and white dots of stars shine through the dark background. Thin silvery trails depict the path of a manned space craft.

The Space Window was dedicated on July 21, 1974, the fifth anniversary of the APOLLO XI landing. Dr. Thomas Paine, former NASA administrator, was the window’s benefactor.

The Space Window is regarded as the embodiment of “the intersection of religious thought with the spirit of exploration and the mysteries of the universe,” the meeting of science and religion.