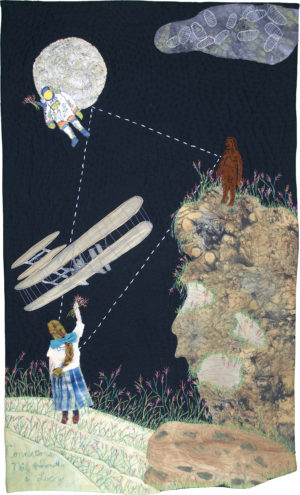 When NASA astronaut Neil Armstrong stepped onto the surface of the Moon on July 20, 1969, he carried with him a small swatch of canvas from the 1903 Wright Flyer, the first powered aircraft to sustain controlled flight. Armstrong and fellow astronaut Buzz Aldrin left footprints in the soft moon dust, footprints clearly visible to the NASA spacemen who made subsequent lunar voyages and left their own marks on the Moon’s surface.

In 1911, fifteen-year-old Ivonette went for a plane ride with her Uncle Orville at Huffman Prairie, near Dayton, Ohio. All her life she told the story. “I loved it,” she said. “I felt so safe and I could see everything. It changed my life.” When she died at age 99, Ivonette was the last person living who had flown with one of the Wright Brothers.

In 1974, paleoanthropologist Donald Johanson uncovered the remarkably preserved fossil skeleton of a small, bipedal female near Hadar in Ethiopia. He and his crew called her “Lucy.” At the time, Lucy was the oldest known early hominid (3.2 million years before the present); not far away a fossilized trail of footprints in an ancient streambed in northern Tanzania (3.6 million years BP) suggests adults and possibly a child walking upright across the muddy ground toward some unknown destination. Mary Leakey excavated these famous Laetoli (the word means “red lily”) footprints in 1978.

At a program in Dayton, Ohio, (probably in 1979) Neil Armstrong appeared with Ivonette Wright Miller and Richard Leakey (Mary’s son), celebrating an anniversary of the moon walk. The first man on the moon, one of the first teenagers to fly, and a representative of the most ancient known people–on the same stage at the same time. All of us in the audience were touched by the connections with our deep past, the accelerating pace of scientific discoveries, and the mysteries of our future. “It changed our lives,” Armstrong said. “None of us were ever the same.”

Artist Website
← Reach for the Moon Cosmic Moon Over the Mountain →