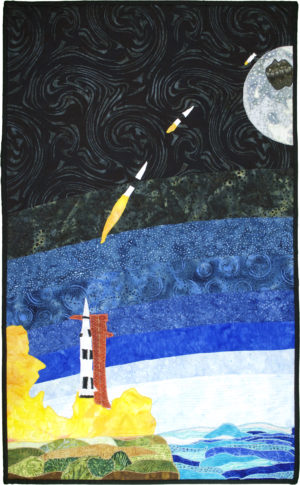 The Voyage of Saturn V from Earth to the Moon

The Voyage from Earth to the Moon, co-designed with my sister, Joanne Hillestad, graphically represents the journey of the astronauts from the Earth to the moon. The Saturn V lifted off at Kennedy Space Center in FL. It was used by NASA from 1966-1973 and launched astronauts toward the moon in Apollo missions 11-17.
The first stage rocket is ejected about 42 miles above the Earth, the second stage is ejected just before the rocket reaches the orbit of the moon. The third stage then propels the spacecraft out of Earth’s orbit toward the Moon.