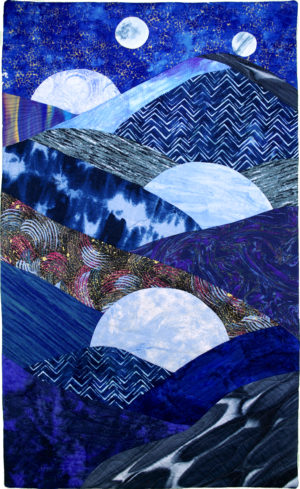 “Blue moon…You saw me standing alone…Without a dream in my heart…Without a love of my own….”

A “blue moon” is a special term because it does not occur frequently. A “blue moon” occurs when there is a second full moon in a month. I felt inspired to portray a “blue moon” because of the rarity of this phenomenon.

This special moon has inspired humans for eons. The rare phenomenon of two blue moons occurring in the same year happens approximately once every 19 years. 1999 was the last time a “blue moon” appeared twice, in January and March. This fantastical composition shows the stages of a blue moon rising and crossing the sky.

I became inspired by the sense of mystery and fantasy of a “blue moon” as my second eldest granddaughter was born under the second blue moon of 1999.

The quilt was machine-pieced with some hand applique and then machine quilted.