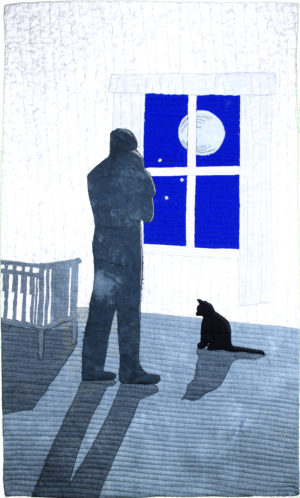 2015 has been a year of challenges and changes. My father was hospitalized in April, and unfortunately did not recover. One of the many things he loved was music, especially classical, jazz, Broadway musicals, and Big Band hits, such as Glenn Miller’s Moonlight Serenade. I chose the topic for this quilt just after my dad died, as a tribute to him and his love of music, which was passed on to his children and grandchildren.

Moonlight Serenade captures a universal moment in parenthood, holding a small baby and singing softly until sleep comes at last. Sewing the shadows onto the soles of the feet after quilting the floor reminded me of Peter Pan, one of Dad’s favorite stage shows (and how I got my name).

We lost Boris, our 15-year-old black cat, to old age in late September. He became part of the quilt as well, his third appearance in my fiber art. I chose to work with a limited matte color palette, mostly grays, to keep things serious and quiet. The angled perspective was challenging, but made for a more interesting composition.

“Second star to the right, and straight on ‘ til morning.” –J.M. Barrie, Peter Pan