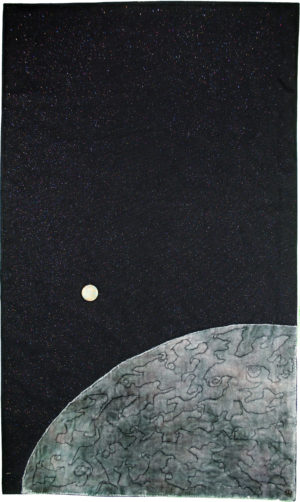 As the Apollo 15 Command Module Pilot, Alfred Worden orbited the far side of the moon 2,235 miles away from his fellow astronauts on the surface. Guinness World Records declared him to be the World’s Most Isolated Human Being. Alone in space, watching the Earth rise over the Moon’s dark side, Worden concluded that his purpose was not to reach out to the Moon but to look back to our finite home planet.

I was initially attracted by the idea of such a unique isolation since every human can identify with feelings of being alone on some scale. But, in studying Al Worden, what came to inspire me the most was the thoughtfulness of the man whose experience of being so alone in the vastness of space gave him a profound insight to the humanity on the small planet we call home.

I wanted to capture that feeling of vast space and endless stars with the warmth of Earth just beyond the mysteries of the Moon’s surface.

Black velveteen for the deep of space overlayed with glittered netting for stars. Hand dyed velvet for the moon. Stone bead for earth.