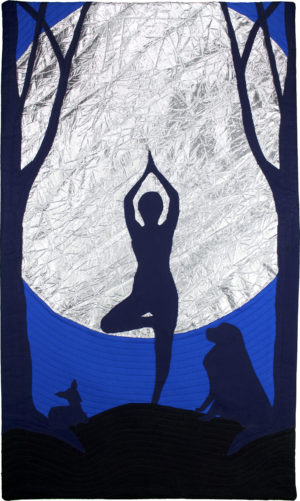 A Modern Artemis re-imagines the Greek Goddess of the Moon and the Hunt as a goddess for the 21st century.

Traditionally, Artemis is shown outfitted with bow and arrow, with a stag and hunting dog. In the spirit of her reinvention, she is accompanied here by a fawn–symbolizing her new take on life, and a guardian dog, who protects and defends but doesn’t instigate attacks. It’s my belief that while still a protectress of girls and women, she has learned over the centuries not to be quite so quick to overreact.

At home in the forest, Artemis is shown at the top of a rise, welcoming the silver full moon with her yoga tree pose, as she hunts for inner truth. She is sheltered between twin trees, symbolizing her eternal connection to her twin, Apollo.