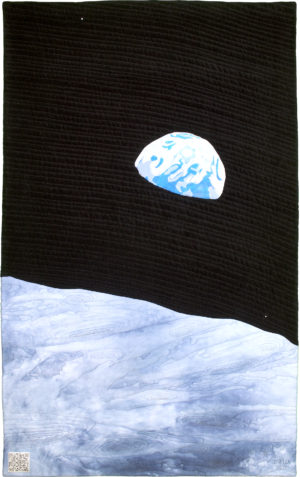 The iconic photograph, Earthrise, taken by the Apollo 8 astronauts, Bill Anders, Jim Lowell, and Frank Borman on December 24, 1968, fundamentally changed how the world viewed our lovely, jewel-like planet. Seeing gibbous Terra, nestled in the black velvet of space and rising above the stark lunar landscape brought an awareness of just how fragile, how separate, and how special the Earth is.

The Apollo missions sparked my interest in science and like most youngsters, engendered a fervent dream to become an astronaut. While I’ve remained earthbound, Apollo inspired me to study the heavens through a telescope as an amateur astronomer and to study the universe on the genetic level as a molecular biologist. How many others were also inspired by the space program and how have their inventions and research improved our lives?

While I tried to remain true to the photograph, the quilted lunar topography was influenced by my hand-dyed fabric. To enhance the crater depths, I cut away portions of the inner layers. Terra’s cloud cover is created with a layer of silk organza over depleted dryer sheets and stitching.

The QR code on the bottom left links to a video simulating the events that led to the Earthrise photograph combined with the actual command module recording that was released for the 45th anniversary of the event. You can hear the excitement in the astronauts’ voices as they first see the earth appear over the lunar horizon while Commander Frank Borman executed the planned capsule roll.