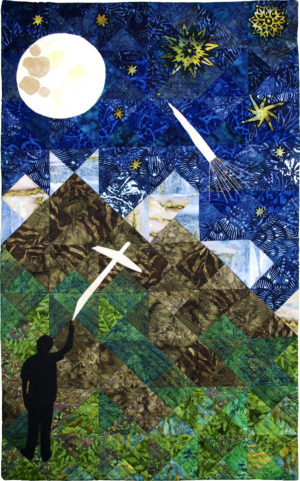 My quilt is inspired by the astronaut Jack Swigert. I chose him because I currently live in Colorado which was his home state. The most I knew about him was from the movie Apollo 13. Then I read about him and realized how much more there was to him and his pursuit of space flight.

He learned to fly at 16, was in the Air Force, the Air National Guard and applied 3 times to NASA before being accepted. After NASA, he ran for Congress despite being diagnosed with cancer, winning his election and planning to serve until he died before he could take office. And there was so much more that he accomplished. In spite of obstacles and disappointments, he kept moving forward.