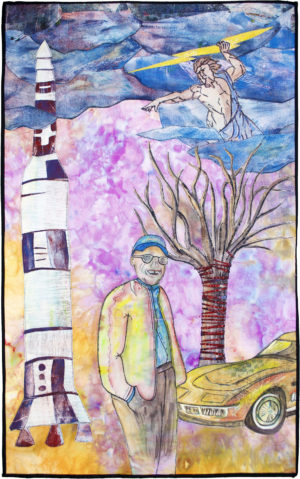 The commander of the Apollo 12 mission to the moon was Charles ‘Pete’ Conrad. He was a larger than life character who overcame childhood adversity and dyslexia to become the third person to walk on the surface of the moon.

The Saturn rocket was struck by lightning on lift off and there were a few scary moments of uncertainty determining if the flight would need to be aborted. The crew made a perfect landing on the moon and returned to earth where Richard Gordon, Alan Bean and Charles Conrad drove identical 1969 Chevrolet Astrovettes.

Pete, as he was known to all his friends had a motto ‘When you can’t be good, be colorful,’ and that is why his tree in the Astronaut Memorial Grove in Houston is the only tree lit with red light. It was an honor making this art quilt.