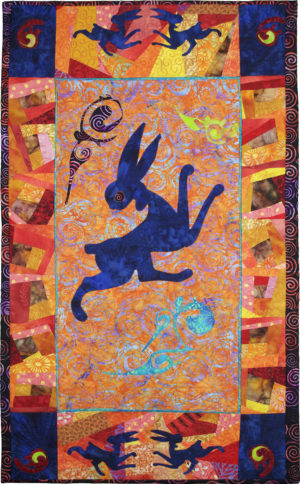 For many cultures, hares and rabbits have been associated with the Moon. They are among some of the oldest creatures linked to the Earth Mother, symbolising regeneration and renewal of all life. To the Egyptians the hare was known as Osiris and was sacrificed to the Nile to ensure seasonal renewal. The Sioux Winnebago Indians believed “Menebuch’ (the great Hare) possessed the secrets of the elements of life. And the many tribes of the Celts often depicted the hare as either the hunter or the hunted, possessed with great knowledge.

I am fascinated by the way many past peoples explained the world around them as we now use science and exploration to explain our world and further.

March was a time hares in the Northern Hemisphere, (September here in the Southern), were seen in the daylight, playing and cavorting with no regard to personal safety. People saw this odd behaviour as a sign of madness but as we all now know, when your hormones are raging, no one gives any thought to the consequences!

My hare was a design taken from a 12c Syrian platter held at the British Museum with the scrolls and swirls reminiscent of the Celtic style. He became a challenge as I wanted to convey an unsettling colour scheme with the whole design slightly offset and no lines are truly straight. This went against all we are taught, or feel is good design.