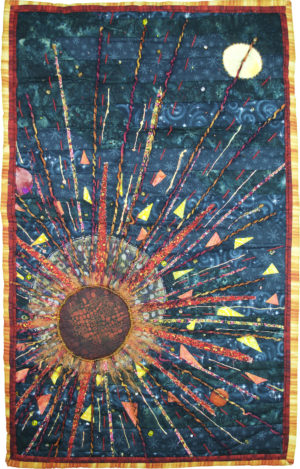 In college, I first read about the various theories of the origin of the moon and her effect on the Earth and was fascinated by the wonder of the moon. When man went to the moon in 1969 and subsequent trips, it was thought that one of the three major theories would be shown to be true, but instead, all three were shown to not be possible!

New data required a new theory, and The Big Thwack was born. Although it has been tweaked, it is still the current most likely origin. The nascent Earth and a somewhat smaller body collided during the solar system’s formation, exploding into a cloud of debris and reaggregating into the Earth and her satellite, Luna.

I have depicted this event at the moment of impact, the first halo of debris expanding into space, the Sun, Venus and Mars just visible. The violence and catastrophic destruction of a newly forming planet resulted in the possibility of life on Earth, leading through billions of years to man leaving our own planet and setting foot for the first time on a world not our own. What a universe!