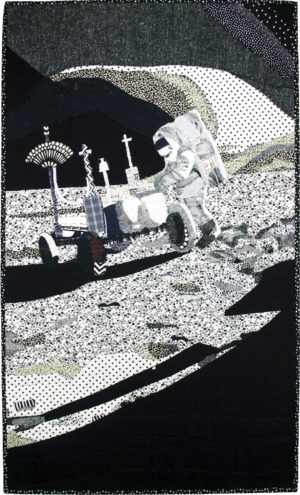 This quilt honors astronaut Colonel James Irwin, USAF. It is based on a NASA photograph taken by Apollo 15 Commander Dave Scott. The photo shows Jim Irwin, Lunar Module Pilot, working near the Lunar Rover. This was the first mission in which the Lunar Rover was used. The astronauts on this mission collected over 170 pounds of lunar material, including a core sample from 10 feet below the surface.

One of Irwin’s achievements which most impressed me was his forming of the Highflight Foundation, after retiring from the Air Force and leaving NASA. He spent his last years as a “Goodwill Ambassador for the Prince of Peace.” Irwin stated that, “Jesus walking on earth is more important than man walking on the moon.” Highflightfoundation.org

Perhaps it’s no coincidence that a cross symbol holds a prominent place on Irwin’s Lunar Rover in this dramatic image!