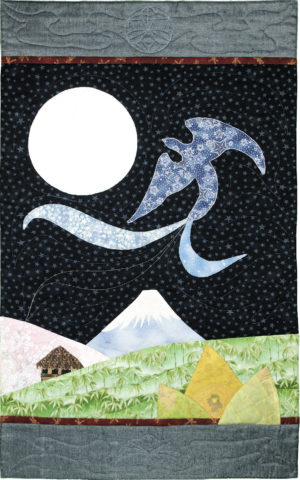 This is based upon the ancient Japanese folktale of the Moon Princess and the Bamboo-Cutter.

One day a poor Japanese bamboo cutter found a bamboo shoot with a golden glow, and inside it was a tiny girl. As he and his wife were childless, this was a joyful discovery. He took her home; she brought them great joy and they raised her as their own. She grew quickly and became known as a lady of incredible beauty. As time went on, however, she grew sadder, especially as she gazed at the moon. The bamboo cutter asked her what was wrong, and she admitted that the moon was her home, and the time for her to return had come.

The bottom half of this quilt depicts the girl inside the golden bamboo shoot and the bamboo cutter’s home. The upper half of the quilt is an artistic representation of the moon princess ascending. When they came to get her, the moon people had put a feathered cloak on her so that she could fly up to the moon and forget her earthly family. Her image, in my mind, became that of a bird.