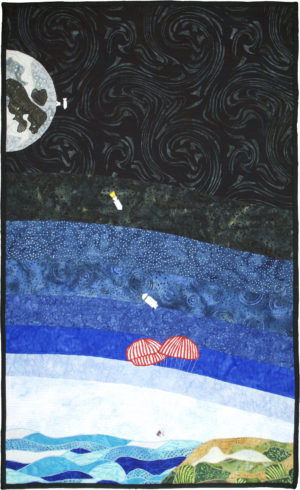 The Voyage of Saturn V from the Moon to the Earth

The Voyage from the Moon back to Earth was co-designed with my sister, Joanne Hillestad. It shows the journey back from the moon.

The flight back to Earth took about 2 days. To prepare for landing, the astronauts moved into the command module and the service module was ejected. The command module parachuted into the ocean 7 minutes later. The entire trip to the Moon and back lasted about 5 days.

While designing this quilt I paid special attention to the details to try to get them as scientifically correct as possible. So while many artists use symbolism in their work, my work is all about the marvels of engineering.