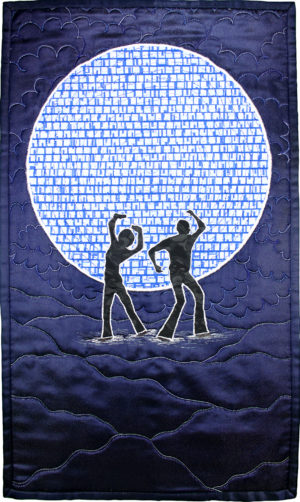 The idea of the moon and its influence on romance has intrigued me since hearing the poem “Silver” by Walter de la Mare. The words in the poem paint such a beautiful picture of what the world looks like in moonlight.
It seems to me that de la Mare could have gone on to describe a moonlit rendezvous amongst all the other images of trees, animals and buildings. A couple dancing alone together; no one else to disturb. A glimpse of silver moonlight flickering off their clothing. A glimmer here, a glimmer there. Casting their own glow through the night.

Moonlight Groovin’ is the second in my series of textile art work showing couples dancing in the spell of the moonlight. The full moon shines brightly down on their dance, illuminating the night and enhancing their mood.

As well as for the Moon Landings, 1969 is known for the legendary Woodstock Festival event. So, for a work to bring back memories of that summer, I chose to depict a young twosome from 1969. Groovin’ and movin’ to their own vibe, but feeling the love as one.